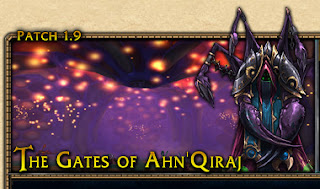 Hey dudes - Silvite here back again with another post!

As I'm sure you're all well aware of by this point, Phase 5 of Classic has just launched, bringing with it a plethora of new things to do. There are new raids, quest lines, and items galore. So, to celebrate this massive content update, I thought it'd be fun to talk about some of the things I'm most excited for in Phase 5.

Before getting into the post, though, I'd just like to make an important announcement. This will probably be my last post for a long time. When I started making posts and videos for WoW Classic back in 2018, I had lot more free time and excitement. Recently, however, it's becoming harder and harder to find time to write, research, edit, and generally produce content while also being productive as a father, husband, and teacher. The global pandemic and my school's summer vacation did free me up a bit in recent months, but this additional spare time couldn't last forever. Looking toward the future, I'm thinking of learning some new work and life skills to better provide for my family while still enjoying the game that I love in my free time.

So yeah...this will probably be it for a while. But as always, if you enjoy this post and want to be notified when I come back to creating content like this in the future, then add yourself to my mailing list below.

Anyway though, with that announcement out of the way, let's get to the real content. Here are some of the things that I'm most excited for in Phase 5 of Classic!

Since first making my paladin, I've been eagerly awaiting the day I would finally fill the relic slot. After all, my priest has had that same ranged slot filled since day 1, so it felt a bit off for my paladin and shaman to constantly have an empty space there.

Relics, which were added to the loot tables of existing dungeon bosses and some of the new raid bosses in AQ, alter specific spells and abilities of paladins, druids, and shamans. There are only 5 total for each class and it's pretty easy to hunt down the one you want as far as I can tell, but since my characters are pretty well geared at this point, I'm not SUPER excited to run the old dungeons to pick them up. Still, I do want them something fierce, so I'll bite the bullet there.

Seeing the Ahn'Qiraj Opening Event (not just the war effort) 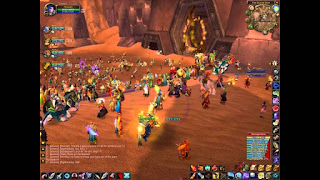 The biggest event in WoW history - the opening of the gates of Ahn'Qiraj! Though I participated in the war effort a tiny bit way back in 2006, I never did get to see the actual opening of the gates. So, this time, I'm really hoping that I'll be able to witness the massive behemoths storming out of the gates in southern Silithus - at least for a few seconds before getting ported out of the zone.

Honestly, I'm not all that hyped about the war effort or the scepter questline, since both will be completed by players far more hardcore than me. I'm much more pumped for those guys to bang that gong and give us all a grande show. 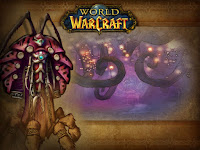 I'm sure this is the biggy for everyone that's ground Molten Core and Blackwing Lair to dust - the new (old) 40 man raid, The Temple of Ahn'Qiraj! Finally, all that nature resistance gear that I didn't farm will be put to use as we squash some bugs and old god minions!

As you may or may not remember, I played on a private server a few years back. And while I can't really count my raiding experience there as my own, since I was mostly carried through MC and BWL the few times I participated, I quit it before AQ was released. This means that, technically, AQ40 is the first fully new content that I'll experience in Classic. And even though I know it'll be a wipefest, it'll be a blast to figure everything out with my guild and to finally get out of Blackrock Mountain for a change.

Oh, plus we're finally getting that sweet mana oil to raid with, so yeah...that'll be pretty awesome too!

Finally, the one thing that I'm excited for above ALL others in phase 5 is this - completing the dungeon set upgrade quest on my paladin.

As you're all probably aware, we've been able to collect the dungeon sets since the beginning of Classic. Each class has one: the Vestments of the Devout for priests, Dreadmist Raiment for warlocks, Lightforge Armor for paladins, and so on. Well, back in the day Blizzard realized that not every player was able to raid to collect better gear, so a quest chain was created which allowed players to complete objectives out in the world and in dungeons to upgrade their set pieces - often called the Tier 0.5 sets.

Well, back in the day I worked pretty hard to collect these pieces and complete the chain on my priest, but I was only able to finish it in Wrath of the Lich King. That's why I definitely wanted to do it as current content this time around. With my priest being my main raiding toon, however, I thought that I should strive to achieve this goal on a nonraiding character instead. So, after capping my paladin, I collected the full Lightforge set, picked up as much ZG gear as I could, and prepared myself for this grind. 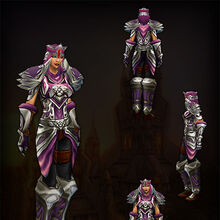 It's going to be a long and expensive road - especially since I don't really have any gold on my Alliance characters - but I'm excited to have some epic questing to do when I'm not raiding that will actually help to boost my character's strength as a tank. It'll be a fun project for sure, and I can't wait to rock that full set of Soulforge in front of the Ironforge bank!

So yeah, Phase 5 is here and that's pretty awesome. From what I understand, this is probably going to be the longest phase in Classic that we've had to date, but we've got quite a lot to do. In general, I'm really excited to get started, but I'd like to know what you think too. Are you excited for the dungeon set upgrade quest chain, or are you more pumped up for the scepter quest? Do you plan on running AQ20 into the ground, or skipping it altogether like me? Let me know by leaving a comment down below.

But anyway, that's it for today.  If you liked this post, add yourself to my mailing list below so that you get notified when I create more content in the future. Though I'm going to step away from regular content creation, I'm sure that I'll pop in from time to time with something, so I definitely don't want you to miss out. Follow me over on Twitter to keep up with what I'm doing in game as well, and check out my videos over on YouTube as well, as there's still a lot of great stuff over there too. In any case, thanks for reading, have an awesome day, enjoy Phase 5, and as always...

Posted by SilviteSoltis at 7:00 PM