Hey dudes! Silvite Soltis here and today I'm happy to present to you my next WoW Classic "Get Geared Fast" guide! Today, we're going to shine up out battle axes and smash some faces. Right after we eat up from our grind to 60... Yep, it's time to gear up our DPS warriors!

Let's get right into it! 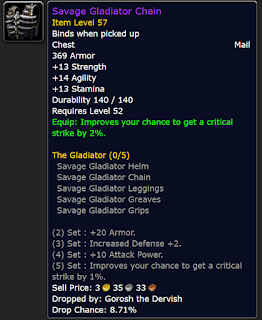 First off, you're going to want to run Blackrock Depths as early as possible. There are over 30 items that drop here that dps warriors can make use of. Granted, they're not all spectacular, but many of them are pre-raid best in slot, so you really should have this on your list...

You can start doing this dungeon in the early 50s, so make sure to find groups as early as possible. In particular, you'll want to do back-to-back Arena runs as much as possible, as 4 out of the 6 arena bosses drop appropriate gear for dps warriors - including the Savage Gladiator items, Girdle of Beastial Fury, and Grizzle's Skinner. Furthermore, the mobs leading up to the arena will still give exp in your early 50s, so it's definitely a good way to grind out a few levels and gear up along the way.

At 55, start doing full runs for the BRD (and, if Alliance,  Onyxia) attunements. There are some amazing items later on in the dungeon (such as Warstrife Leggings and Hand of Justice), but you likely won't be able to find a group willing to attempt a full clear with you until you're level 55 or higher. Plus, this is when you can start the attunements anyway, so it really just makes sense to do this from here. You can also continue doing Arena farms as needed, but hopefully you'll grab most of the items before this point.

Step 2 - Do These Quests

Now that you're quickly approaching level 60, there's a few quests you should make sure you complete. First and foremost, complete the quest Job Opening: Guard Captain of Revantusk Village if you're playing Horde in order to obtain an amazing DPS trinket, Rune of the Guard Captain. Since trinkets are a bit hard to come by, this will go a long way for your warrior.

Next up, do the chain to get Blackhand's Breadth, which involves running LBRS. This is the Onyxia attunement quest chain for Horde players, but for Alliance you'll get the item to start this chain from the final boss of LBRS, Overlord Wyrmthalak. These quests will take you through LBRS and UBRS, giving you a shot at some decent gear along the way. While you run LBRS, keep an eye out for great items such as Blackcrow from Shadow Hunter Vosh'gajin, as well as any other potentially useful gear. And, or course, the same goes for the UBRS runs. After all, each of these dungeons contains around 20 useful drops for dps warriors, so you're likely to fill some slots along the way...

Finally, head over to the Plaguelands to do the quest chain In Dreams for your pre-raid BiS neck, Mark of Fordring, as well as the quest chain ending in The Scarlet Oracle Demetria [H] or Order Must Be Restored [A] for the decent Gorewood Bow, assuming you didn't get one from Blackrock Spire. Wrap up these quests, then move on to the next step...

After you've run BRD into the ground and wrapped up the few lucrative quests for your warrior, it's time to head over to UBRS.  This dungeon is one of the best for warriors in terms of quality items - with around 20 of the BEST dps warrior items - including Truestrike Shoulders, Battleborn Armbraces, and Blademaster Leggings (for those of you NOT getting Devilsaur gear). There's a lot more loot to be had, though, so make friends with a key-holder and head on in!

If you decide to go as a tank just to secure a spot, make sure to be clear that you're going for DPS gear from the outset to avoid accusations of ninjaing, as there's likely to be a lot of competition for loot while you're there. Also, make sure to take a screenshot when you state it, in case your group is full of drama queens.

Good luck in the Spire!

When you've run enough dungeons and have only a few empty slots left to round out, head over to the auction house to buy some cheap blues or high AP green items. Alternatively, you could explore different dungeons as well - especially dungeons with quests that award gear like the Kirtonos the Herald questline in Scholomance which awards Mirah's Song, a wonderful sword. But, by this point you should be geared pretty well, so if you just want to smash things in MC and Ony, you should be good to go! Just make sure you wrapped up all of your attunements!

Congratulations on getting to level 60 and good luck getting your smashy warrior all geared up! Honestly, the hardest part of gearing your warrior will be getting groups that don't expect you to tank, but if you manage to get a solid group and make sure to announce what you're going for as you run the dungeons, you should be fine. As a final note, you probably noticed that I didn't mention anything about Dire Maul in this guide, despite it being available. The reason for this is that while much of the gear IS very good, there simply isn't enough of it for DPS warriors to make it a viable option for fast gearing. However, if you plan to do tribute runs for the buffs before heading into MC and/or Ony once you are geared, you should keep an eye out for potential upgrades.

But anyway, that's it for today. If you liked this guide or found it useful, let me know by leaving a comment down below. Follow me on Facebook and Twitter for updates on future content releases, streaming, and more. Also, if you prefer video guides, check out my YouTube channel where I turn all of these guides into videos eventually. Finally, if you'd like to support my endeavors, consider becoming one of my Patrons over on Patreon. I really appreciate your support - whether it's a donation or just from you sharing this post with someone who might find it useful. But yeah, that's all for now. Thanks again for reading. And as always...

A special thanks to wowhead.com and the Atlasloot addon for making this guide possible, as well as to all of my YouTube subscribers who voted in the poll that inspired me to write this guide in the first place. Thank you all for your support!

Posted by SilviteSoltis at 12:47 AM